Next JS : The Game Changing Update

Next JS : The Game Changing Update

Vercel’s Next.js is an open-source web development framework that allows React-based web applications to have server-side rendering and generate static websites. Next.js is a development environment where time spent getting things done leads to the ultimate efficient and functional applications that you have always dreamt of having.

Next JS’s authentication process is very straightforward and comes equipped with added encryption. Authentication verifies a user’s identity, whereas authorization limits what a user can access. Next JS supports a variety of authentication patterns, each designed for a specific use.

For more authentication you can check fork next.js official repo in your system

In the command line, navigate to the root directory of your project.

Alternatively, to skip all the prompts, supply the path to the repository with the –source flag and pass a visibility flag (–public, –private, or –internal). For example, gh repo create –source=. –public. Specify a remote with the –remote flag. To push your commits, pass the –push flag. For more information about possible arguments, see the GitHub CLI manual

Next.js goes beyond the Next Framework by providing built-in universal web pack plugin and a mechanism for automatic code splitting. It ships with a modern toolchain that guarantees you get fast updates, scalability, and ease of use with no extra configuration required. We’re talking about:

Next.js 13 added a new file-system-based router built on top of React Server Components that supports layouts, nested routing, loading states, error handling, and other features. Next.js includes a file-system-based router that is based on the concept of pages.When a file is added to the pages directory, it becomes available as a route by default. Most common patterns can be defined using the files in the pages directory. 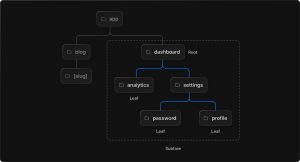 Tree: A convention for visualizing a hierarchical structure. For example, a component tree with parent and children components, a folder structure, etc.

Subtree: Part of a tree, starting at a new root (first) and ending at the leaves (last).

Root: The first node in a tree or subtree such as a root layout.

Leaf: Nodes in a subtree that have no children such as the last segment in a URL path.

Next.js 13 introduced a powerful new Image Component that ships less client-side JavaScript, is easier to extend and style, is more accessible by default requiring alt tags, and is aligned with the Web platform to use features such as native browser lazy loading.

Visual Stability: Automatically prevent Cumulative Layout Shift.Images are only loaded when they enter the viewport, with optional blur-up placeholders,resulting in faster page loads.

Asset Flexibility: Image resizing on demand, even for images stored on remote servers.

Next.js 13 introduced new ways to render your application. This page will help you understand the differences between rendering environments, strategies, runtimes, and how to opt into them.

Next.js 13 provides a new method for retrieving and managing data in your application. The API has been simplified in order to be compatible with React and the Web Platform. This means that earlier Next.js APIs like getServerSideProps, getStaticProps, and getInitialProps will not work in the new app directory. Instead, there is a single flexible method for fetching, caching, and revalidating data at the component level.

We advocate collecting data from Server Components within the app. Server components always retrieve information from the server.

This has some advantages, including:

How to install Next.js To Create Your Next App

Let’s start by making sure your development environment is ready. Firstly install Node.js from here if you don’t already have it. Node.js 10.13 or later is required for the development of project

Install a proper integrated development environment for your app development such as visual studio code, android studio, or jet brain. The procedure may differ for different operating systems.

To create a Next.js app, open your terminal, cd into the directory you’d like to create the app in, and run the following command:

You now have a new directory called nextjs-blog. Let’s cd into it:

Then, run the following command:

Cost of iOS App Development in 2023: A Complete Breakdown

How to Start a Cryptocurrency Exchange Business

Website vs Web App: Which is better for your business?

Please subscribe to our newsletter to get the latest news in your domain of interest. Don't forget to follow us on social networks!